LIVE Register
PARTICIPANTS AREA
Register
Media > News > Revolution in TRANSPYR COAST TO COAST: from west to east and with 4 stages in France 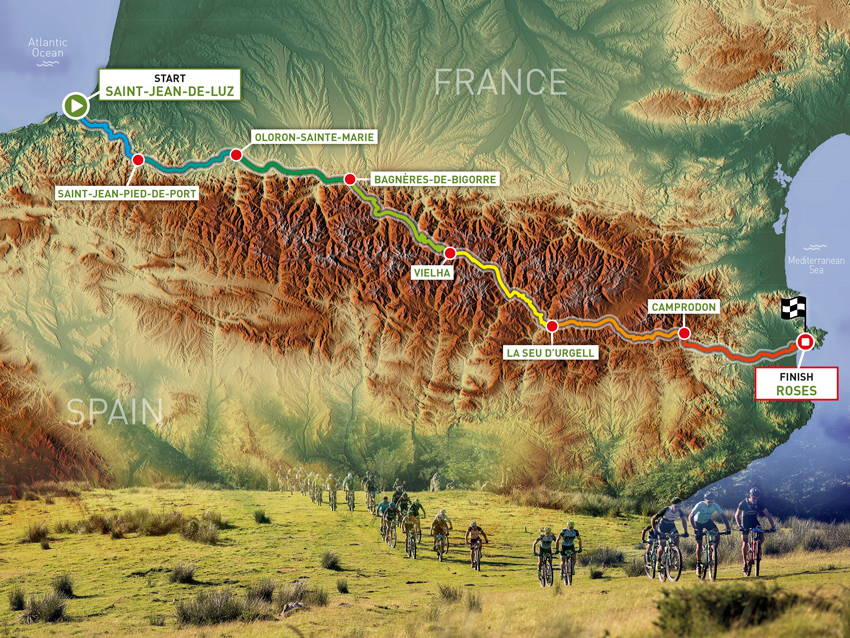 TRANSPYR COAST TO COAST revolutionizes its usual format and in 2020 will travel from west to east, starting on the French Basque Coast and ending on the Costa Brava after seven exciting stages.

After 10 years proposing a race through the valleys of the southern slope of the Pyrenees, with cyclists from all around the world and being considered one of the ten best MTB stage races in the world, TRANSPYR COAST TO COAST boost this remarkable change.

Without leaving its coast to coast essence, revolutionizes the race proposing a new course. From the Cantabrian Sea to the Mediterranean. Leaving Saint-Jean-de-Luz to cross the Pyrennes from north to south, entering Spain through the Val d’Aran and ending in Roses.

The 2020 edition of TRANSPYR COAST TO COAST will be held from June 14 to 20 with the following stage locations: Saint-Jean-de-Luz, Saint-Jean-Pied-de-Port, Oloron-Sainte-Marie, Bagnères-de-Bigorre, Vielha, La Seu d’Urgell, Camprodon and Roses.

Últimas notícias
Ship to Cycle service
Get the best memories with...
A decade of Transpyr Coast to...
TRANSPYR COAST TO COAST is...
We inform you that we use first- and third-party cookies in order to improve the performance of the page and for analytical and advertising purposes. If you want more information or would like to manage them, please go to the
Cookie Settings.
I ACCEPT COOKIES
WE CARE ABOUT YOUR PRIVACY
You can set your consent preferences and determine how you want your data to be used according to the purposes detailed below.
Uncheck all ACCEPT ALL
These cookies are necessary for the basic operation of the website and, therefore, are always active. They include cookies that remember the actions you make when browsing the website in a single session or, if requested, from session to session. They help in online shopping processes, in addition to providing assistance in security matters and in compliance with regulations.