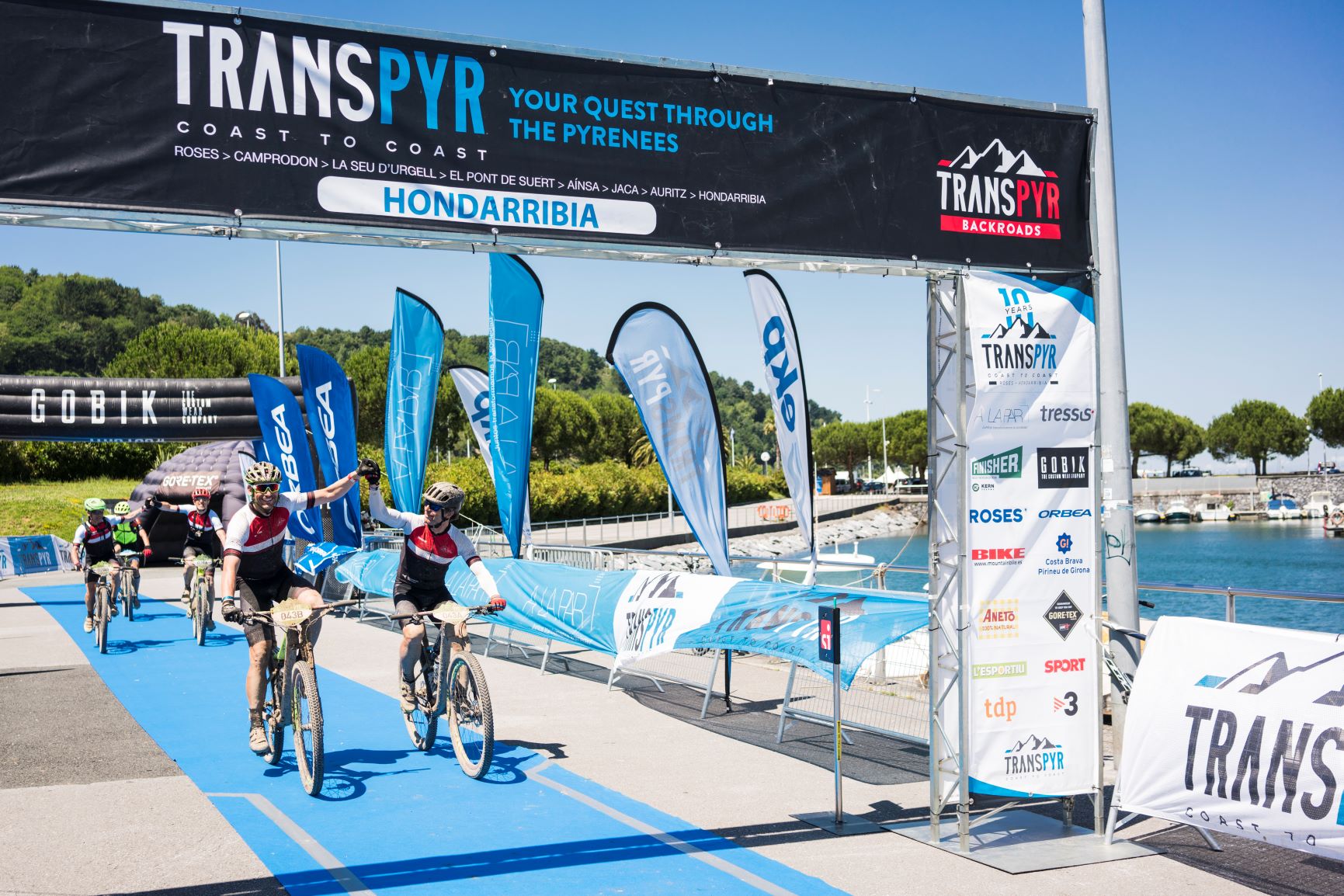 The glorious arrival of the cyclists to the marina in Hondarribia (Gipuzkoa) marked the end of the tenth edition of Transpyr Coast to Coast. A decade completing the mission of uniting two seas, the Mediterranean and the Bay of Biscay, across the southern face of the Pyrenees. An endeavour attempted each year by cyclists from all over the world, who come to tackle what many consider one of the world’s top MTB stage races: Transpyr Coast to Coast is not your run-of-the-mill stage race; it is more than an adventure and well beyond a challenge.
The almost 400 athletes who took part this year were treated to a highly select route, a combination of technically challenging tracks, hair-raising descents, gruelling climbs, fast, flat stretches and breathtaking scenery. This exceptionally stunning route, which began in the lush Girona Pyrenees and continued into the changing landscape of the Aragon and Navarre Pyrenees before ending in the Basque Country, astounded everyone who undertook this mission, unlike any other in the world.

Australia, New Zealand, Canada, Argentina, the United States, Brazil, Colombia, Mexico, Chile, South Africa and practically every country in Europe. International representation was once again evident in a particularly special edition of the race, which finished seven days after the participants took to the starting line on the Costa Brava, in the port of Roses. An exceptional achievement, to complete the challenge of uniting two seas in seven stages, over an 800km route with an elevation gain of more than 20,000 metres. This year, 85% of the almost 400 cyclists who started in Roses finished the race.

Both the mountain bikers who competed in the Transpyr Gran Raid MTB by Tressis a La Par and the road cyclists in Transpyr Backroads were forced to give it their all and conserve their energy to make sure they had enough left in the tank to meet the challenge of completing this gruelling test of endurance. The final ceremony certified the finishers as veritable mountain bike and road cycling masters, in the tenth edition of a race in which international riders comprised 52% of the field.

A common goal that unites participants

The challenge was clear: to cross the Pyrenees from one coast to the other in seven stages. Prior to the start in Roses (Girona), the participants took part in one of Transpyr Coast to Coast’s biggest traditions: a small bottle is filled with water from the Mediterranean; it is then carried throughout the race and finally mixed with water from the Bay of Biscay one week later. This symbolises the joining of the two seas, the goal for which the riders trained so hard for so many months.

After an initial stage that finished in Camprodon, the riders tackled the transitional stage ending in La Seu d’Urgell, with gruelling climbs up the Verde and Toses mountain passes, which tested a number of cyclists who had already experienced difficulties on day one.
The third stage, from La Seu d’Urgell to El Pont de Suert, was marked by rain and bitter cold, which seriously influenced the day’s riding and pushed the cyclists and their endurance to the limit. Those who made it through were grateful that the rest of the race transpired under much more favourable weather conditions.

Pain and enjoyment on the bike

After El Pont de Suert, the transition from the Catalan Pyrenees to, first, the Aragon Pyrenees, with stages ending in Aínsa and Jaca, and, afterwards, the Navarre Pyrenees, with a finish in Auritz-Burguete, left no one indifferent. The participants commented on the difficulty of some of the single-tracks they had to ride down, while other stretches gave them the opportunity to let loose and enjoy the speed.

A changing landscape that mesmerised cyclists

The stages came and went, and for the cyclists who made it to Auritz-Burguete with their strength intact, their goal of becoming a finisher was well within reach. Though you should never count your chickens before they are hatched. If one thing has become clear in the ten editions of Transpyr Coast to Coast, it is that no stage is a walk in the park and that you can never relax until you cross the finish in Hondarribia. To date, hundreds of cyclists have completed the mission and proudly bear the word Finisher on their jerseys.

The arrival of the cyclists in Hondarribia brought to an end an enthralling edition of one of the world’s toughest stage races; one that sears the following sentiment into the mind of all those who complete it: after Transpyr Coast to Coast, nothing is ever the same!

Últimas notícias
Ship to Cycle service
Get the best memories with...
Revolution in TRANSPYR COAST...
TRANSPYR COAST TO COAST is...
We inform you that we use first- and third-party cookies in order to improve the performance of the page and for analytical and advertising purposes. If you want more information or would like to manage them, please go to the
Cookie Settings.
I ACCEPT COOKIES
WE CARE ABOUT YOUR PRIVACY
You can set your consent preferences and determine how you want your data to be used according to the purposes detailed below.
Uncheck all ACCEPT ALL
These cookies are necessary for the basic operation of the website and, therefore, are always active. They include cookies that remember the actions you make when browsing the website in a single session or, if requested, from session to session. They help in online shopping processes, in addition to providing assistance in security matters and in compliance with regulations.